West Point Commandants and the Training of Civil War Leaders

Between 1817 and 1864, sixteen officers were assigned as Commandants of Cadets at the U.S. Military Academy. They played an important role in training the officers who would serve on both sides of the Civil War.
Historians criticize the program as antiquated for its time: A course in Napoleonic strategy and tactics that did not account for rifled weapons or the particularities of terrain. Yet these commandants made changes to the program, developed new textbooks and instructed cadets who became field generals.
The biographies of the commandants are presented along with their contributions to the Academy, notable graduates and other military service.

Allen H. Mesch is an author, educator, and historian from Plano, Texas. He taught at the University of Texas at Dallas, Southern Methodist University, and Texas Woman’s University. 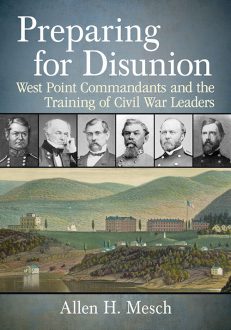 You're viewing: Preparing for Disunion $39.95
Add to cart