Power and Control in the Television Worlds of Joss Whedon

Ever since the premiere of the small-screen incarnation of Buffy the Vampire Slayer in 1997, the television worlds of Joss Whedon—which have grown to include Angel, Firefly, and Dollhouse—have acquired a cult following of dedicated fans and inspired curious scholars. The quest for power and control over humans and other animals is a constant theme running throughout all four series. This study explores the myriad natural and supernatural methods Whedon’s characters use to achieve power and control over unsuspecting friends and foes, including witchcraft and other paranormal means, love, aggression, and scientific devices such as psychosurgery and psychopharmacology. A catalog of characters and a complete list of episodes for each series completes this valuable addition to the growing body of scholarship on television’s “Whedonverse.”

Sherry Ginn is a retired educator currently living in North Carolina. She has authored books examining female characters on science fiction television series as well as the multiple television worlds of Joss Whedon. Edited collections have examined sex in science fiction, time travel, the apocalypse, and the award-winning series Farscape, Doctor Who, and Fringe. 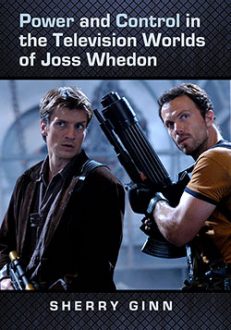 You're viewing: Power and Control in the Television Worlds of Joss Whedon $29.95
Add to cart