The five directors studied here embody postmodernism—the erosion of the earlier 20th century distinction between “high culture” and so-called mass or popular culture that began in the 1950s and 1960s. Comprised of repetition, pastiche, parody and homage, their postmodern films borrowed from high and low, from directors like Lean, Kurosawa, Hitchcock, Ford and Godard.
The personal history and childhood interests of each director are studied, along with their apprenticeship in film school and early directorial efforts. This shared film school background and their familiarity with the films of Hollywood’s classic period, of the entire oeuvres of certain directors, have allowed them mastery of a wide range of film styles, genres and techniques. 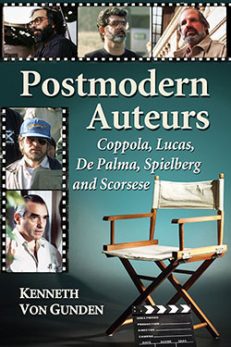