Politics and the American Television Comedy

A Critical Survey from I Love Lucy through South Park

This work examines the unique and ever-changing relationship between politics and comedy through an analysis of several popular American television programs. Focusing on close readings of the work of Ernie Kovacs, Soupy Sales, and Andy Kaufman, as well as Green Acres and The Gong Show, the author provides a unique glimpse at the often subversive nature of avant-garde television comedy. The crisis in American television during the political unrest of the late 1960s is also studied, as represented by individual analyses of The Monkees, The Smothers Brothers Comedy Hour, Rowan and Martin’s Laugh-In, and All in the Family. The author also focuses on more contemporary American television, drawing a comparative analysis between the referential postmodernism of The Simpsons and the confrontational absurdity of South Park.

Independent scholar Doyle Greene is the author of several books and serves on the editorial board of Film Criticism. He lives in Minneapolis, Minnesota. 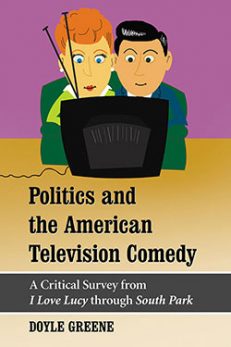 You're viewing: Politics and the American Television Comedy $39.95
Add to cart