Playing for a Winner

“He never felt like a Hall of Famer.” “You can’t argue with championships.” “If he was so good, why were his teams so bad?”
On talk shows and in sports bars, statements like these are often made about both underrated and overrated players. It’s generally accepted that being in a bigger market or on a winning team can cause a player to be overrated, while the opposite can leave them underrated. Examining pennant races to show how much attention a team receives and which teams are getting the most attention provides a context to this familiar commentary. This book studies the effects of the sports media spotlight (and its absence) on the fortunes of teams in pennant races and Hall of Fame inductees. Along the way, the author brings to light accomplished players most non-fans have probably never heard of.

Brandon Isleib is a legislation editor for the City of Seattle. He maintains baseballspotlight.com and has written about baseball for The Hardball Times and Baseball Prospectus. He lives in Tukwila, Washington.

6. Baseball in the Dark: The Best Players Outside the Spotlight 66

17. Modern Playoffs: Better for Fans, Worse for Everyone Else 351

“does something no other baseball book that I am aware of has ever done: it seeks to quantify the way in which media coverage impacts a player’s fame and, in turn, his Hall of Fame chances. I’m recommending it because it’s a fascinating new way to look at players’ legacies…a fresh and rewarding look at baseball history which sheds light onto some of the historical conundrums we still argue about today”—NBC Sports. 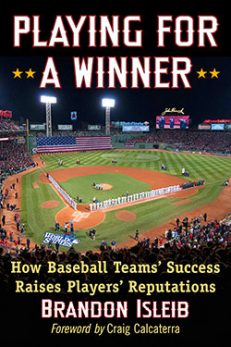