A few sea captains, a couple of college professors, a battle-hardened general, a senator, a congressman, and a knavish adventurer: What could such men have in common? In addition to an eye upon the broader world and a streak of independence, each had a vision of the United States as a model sovereign. All were part of an American effort to create an overseas empire—one that would avoid the mistakes of the European powers and redefine the face of imperialism.
Beginning with the 1839 voyage of Captain Charles Wilkes that opened American relations with Samoa, here are biographies of 12 men instrumental in the incorporation of America’s five island dependencies. Besides Wilkes, it covers Richard W. Meade III, who negotiated a treaty with Samoa; Albert B. Steinberger, premier of Samoa; Henry Glass, who took Guam for America; Nelson A. Miles, who led the 1898 conquest of Puerto Rico; B. F. Tilley, first governor of American Samoa; Joseph B. Foraker, first congressional overseer of the possessions; William A. Jones, anti-imperialist and reformer; Frank McIntyre, military administrator of America’s holdings; Theodore Roosevelt, Jr., governor of Puerto Rico; Paul M. Pearson, first civilian governor of the U.S. Virgin Islands; and Anthony M. Solomon, who inaugurated the acquisition of the Northern Mariana Islands in 1963.

Peter C. Stuart is a former newspaper correspondent, roving writer for an international organization and the author of two previous books on Asia’s poor and America’s overseas possessions. He lives in Massachusetts.

“History is best told through the lives of individuals. Peter Stuart excels at making this important but forgotten piece of American history fun to read, through colorful biographies of the bold and visionary who made it happen.”—Walter J. Hickel, former U.S. Secretary of the Interior and former governor of Alaska. 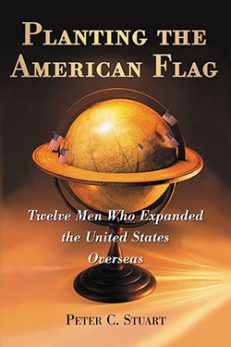 You're viewing: Planting the American Flag $39.95
Add to cart