Piano Interpretation of the Seventeenth, Eighteenth and Nineteenth Centuries

A Study of Theory and Practice Using Original Documents

How should one interpret music of another century? What standards should be applied to an 18th century harpsichord work, for instance, being performed on a piano? Keyboard “methods”—systematic approaches to training, touch, and interpretation—did not evolve until the 19th century, and written methodologies are few. Drawing on primary sources, the author has compiled a detailed analysis of such keyboard “methods” as existed in Europe in the 17th, 18th, and 19th centuries. Most were developed by Couperin, C.P.E. Bach, Türk, J.S. Bach, Mozart, Chopin and Liszt. Also discussed, with translations from their writings and their critics’, are the detailed theoretical works by Kullak and Lussy. Analysis shows which techniques had been adapted from earlier practice and which were original to the composer, demonstrating the evolution of the various methods. Techniques useful in the interpretation of period material, and which still have important applications today, are pointed out.

Elena Letnanová has written three books and more than 100 articles. A pianist and professor at Slovak University of Technology, she lives in Bratislava, Slovakia. 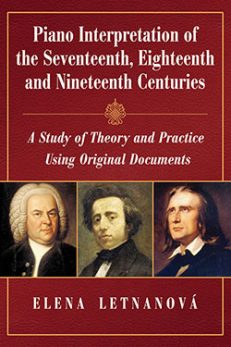 You're viewing: Piano Interpretation of the Seventeenth, Eighteenth and Nineteenth Centuries $29.95
Add to cart