A Biography of the Australian Heavyweight Champion, 1860–1901

Born to former slaves on St. Croix in 1860, Peter Jackson made his name as a boxer with his smooth, fast style and a dangerous one-two combination. After immigrating to Australia, Jackson became that country’s national heavyweight champion in 1886 before moving on to the United States and claiming the title of Colored Champion of the World in 1888. For the next ten years Peter Jackson remained undefeated, finally losing to the great Jim Jeffries in 1898. Although he never received a shot at the heavyweight title—reigning heavyweight champion John L. Sullivan refused to defend his title against a black man—Jackson remains one of the greatest heavyweights ever.

“meticulously researched…skillfully and colorfully narrated”—The Ring; “splendid…Petersen has produced an authoritative work on the great fighter…throughly researched and presented in a well-written and scholarly manner that is both interesting and educational…a detailed and very descriptive portrait of the times”—Cyber Boxing Zone; “Peterson is to be congratulated for affording Peter Jackson his proper place in the pantheon of boxing champions and Australian sporting stars”—Sporting Traditions; “presents the most complete reconstruction of Jackson’s life available. Petersen looks outside of traditional sources, mining the census data preserved on genealogical websites to make sense of the myths surrounding Jackson’s early life”—Journal of Sport History; “Petersen does an excellent job of describing Jackson’s life outside of the ring…well-researched study”—The Journal of African American History; “fascinating – well researched and well organized. It will remain the definitive word on Peter Jackson”—Bulletin of Sport and Culture. 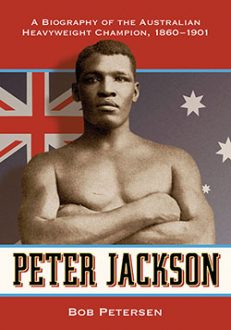