Film audiences have grown used to seeing female characters in “performance roles,” singing or dancing on stages in nightclubs, musical arenas, or theaters—performing their “femaleness” for the fictional audience as well as the film viewing audience. But queer women in film perform on yet another level. In addition to performing their gender for the world, they also perform their sexuality for either a general or an “insider” audience, in ways that can be read to establish a queer visibility, to establish a sense of community, or to show romantic lesbian interest.
This work examines “performance spaces” for lesbian identities in films, evaluating how queer femaleness is signified in contemporary cinema. It studies five films in particular: When Night Is Falling, Better Than Chocolate, Tipping the Velvet, Slaves to the Underground, and Prey for Rock and Roll. Through close textual analysis, evaluations of the conditions under which each film was produced and received, and dozens of audience surveys, it reveals much about both the story worlds of the films and the ways that queer women react to and feel about them.

1. A History of Lesbians in the United States and as Represented in Film      37

2. Click Here to Belong: Queer Community Through Magazines and Websites      61

4. Getting the Couple Together: The Tropes of Glossy Films in When Night Is Falling      98

5. Sex and Violence in the Queer Female Space of Better Than Chocolate      120

7. Formal Experimentation and Political Exploration in Slaves to the Underground      165


Conclusion: Queer Cinema and the Pleasures of Community      207 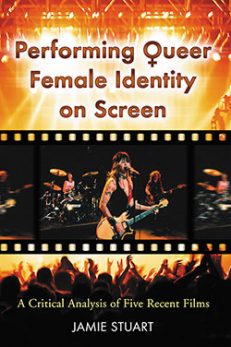