Pennant Hopes Dashed by the Homer in the Gloamin’

After many disappointing seasons during the 1930s, the 1938 Pittsburgh Pirates looked like they were finally poised to claim their first National League pennant since 1927. A hot streak during June and July propelled manager Pie Traynor’s squad into first place. Yet after commanding the top spot for more than two months, Pittsburgh could not hold off the charging Chicago Cubs and experienced one of the most monumental collapses in baseball history. This detailed historical account examines the entire 1938 season, while also looking at the players and events that were a major part of this star-crossed season.

Ronald T. Waldo, a member of the Society for American Baseball Research, lives in Pittsburgh. His articles have appeared in Pittsburgh Pride Magazine and Sports Collectors Digest, and he is the author of several books on baseball history.

1. Murderers’ Row and the Waner Brothers  5

2. Bill Benswanger and Arky Vaughan Arrive on the Scene  25

5. Bucs Bust Out of the Gate Due to Arky Vaughan’s Heroics  69

6. Paul Waner’s Slump and Talk of Rebuilding for Next Year  88

9. Pittsburgh Feels the Pressure and Starts to Wilt in the Summer Heat  146

10. Traynor’s Boys Attempt to Hang on While Chicago Surges  166

11. Pittsburgh’s Final Collapse and the Homer in the Gloamin’  186 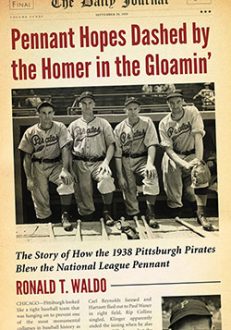 You're viewing: Pennant Hopes Dashed by the Homer in the Gloamin’ $29.95
Add to cart