The Life of a Brooklyn Dodger

Growing up in Louisville, Kentucky, Harold “Pee Wee” Reese amazed neighborhood kids with his marble shooting skills. At 22, he began his rookie year in the Major Leagues, where fans knew him as the long-time shortstop for the Brooklyn Dodgers. During his 16-year career, he contributed timely hits, countless acrobatic defensive plays, stole hundreds of bases and made the National League All-Star team for 10 consecutive years. Reese befriended Jackie Robinson during his first season in the Majors—they soon formed one of baseball’s top double-play combinations. The Brooklyn roster also included such stars as Roy Campanella, Duke Snider, Carl Furillo and Gil Hodges. The Boys of Summer fought for a pennant almost every year and finally won the World Series in 1955, a few years before the Dodgers left for California. Reese served as team captain from 1949 until he retired, and won a spot in the Hall of Fame in 1984. This first full-length biography chronicles the life of the man described as “perhaps the most beloved Dodger in the history of the club.”

SABR member Glen Sparks worked as a sportswriter and newspaper reporter for many years and is now a freelance writer. He lives in St Louis, Missouri. 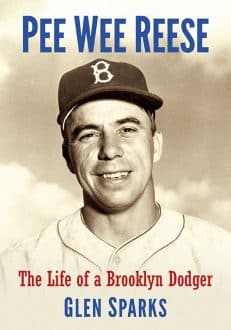