Paul Bern, known throughout the movie business as “Hollywood’s Father Confessor,” earned a reputation for being a loyal and supportive friend and for becoming one of MGM’s most respected and creative directors. After his death, though, he was said to have grown so depressed and despondent over his own apparent sexual inadequacies that he committed suicide, and he would be denounced for attempting to rape his new bride Jean Harlow.
In this biography, the author uncovers startling new facts and argues that MGM knew the real story of Bern’s death—that an estranged, mentally ill common-law wife murdered him. MGM understood that the earlier spouse rendered Bern’s marriage to Harlow, its fastest-rising star, ambiguous if not bigamous, so the studio staged a suicide and embarked on a very public tarnishing of his memory. Included are 93 rare photos, many lost for decades, along with three appendices examining the handwriting on an alleged suicide note and Bern’s will and estate.

The late E.J. Fleming researched Hollywood for decades and penned biographies of Carole Landis and Wallace Reid, among other books. He lived in the country in Connecticut. 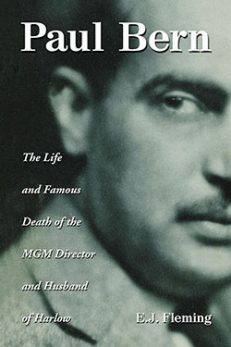