Participants in the Battle of the Little Big Horn

The Battle of the Little Big Horn was the decisive engagement of the Great Sioux War of 1876–1877. In its second edition this biographical dictionary of all known participants—the 7th Cavalry, civilians and Indians—provides a brief description of the battle, as well as information on the various tribes, their customs and methods of fighting. Seven appendices cover the units soldiers were assigned to, uniforms and equipment of the cavalry, controversial listings of scouts and the number of Indians in the encampments, the location of camps on the way to the Big Horn and more. Updated biographies are provided for many European soldiers, along with an additional 5,060 names of Indians who were or could have been in the battle.

Frederic C. Wagner III served as an officer both in the U.S. Army and the New York Army National Guard. He is a decorated Vietnam veteran and worked for 22 years on Wall Street, mostly as a commodities broker. 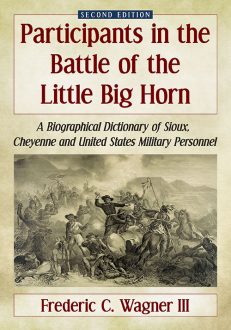 You're viewing: Participants in the Battle of the Little Big Horn $39.95
Add to cart