Interviews and Profiles from the Independent Carolina Baseball League

The players of the independent Carolina League were outlaws. A diverse lot that included preachers and ex-cons, with many former and future Major Leaguers, they played ball during the desperate years of the Great Depression, when half of organized professional baseball’s minor leagues went broke and ceased operations. Despite the number of defaulting leagues and teams, the players were held to their prior contracts, and many found themselves unemployed, unable to play without violating the reserve clause that bound them to their previous club. The threat of being blackballed by organized baseball notwithstanding, hundreds of players went to bat for the independent Carolina League, and their stories offer unique glimpses into the pastime’s—and America’s—most difficult years.

This follow-up to the immensely popular and award-winning The Independent Carolina Baseball League, 1936–1938 (McFarland, 1999) takes the story of outlaw baseball into extra innings, offering a wealth of previously unpublished interviews with the key players and personnel associated with the league. With outstanding coverage of nearly 20 players, including the notorious Edwin Collins “Alabama” Pitts and well-known Lawrence Columbus “Crash” Davis, this book also offers the unique perspectives of umpires, journalists and players’ wives. Appendices include a Pitts family history, the Kannapolis Towelers team record book, player records, and the history of the Carolina Victory League.

R.G. (Hank) Utley is a member of the Society for American Baseball Research and the author of The Independent Carolina Baseball League, 1936–1938 (1999, Seymour Medal runner-up). He lives in High Point, North Carolina.

Tim Peeler is a lecturer in English, journal editor, essayist and poet. He is a winner of the Jim Harrison Award for his contributions to baseball poetry and lives in Hickory, North Carolina.

Aaron Peeler, also a member of the Society for American Baseball Research, covers sports for the Durham Herald-Sun. He lives in Raleigh, North Carolina. 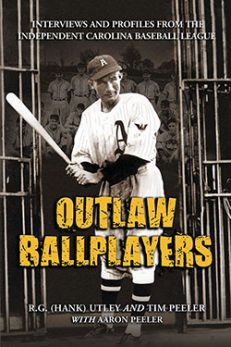