The Winningest Stars (and More Who Should Be)

Just as the Academy Awards have an impact upon stars and their careers, their filmic achievements influence the Academy and contribute to the rich history of the Oscars. Upset wins, jarring losses and glaring oversights have helped define the careers of Hollywood icons, while unknown actors have proven that timing sometimes beats notoriety or even talent. With detailed discussion of their performances and Awards night results, this book describes how 108 actors earned the Academy’s favor—and how 129 others were overlooked.

Roger Leslie is a scholar in the fields of education and film history. A prolific writer of books in many genres, he is sought after for his lively keynote speeches relating award-winning movies to any theme or group. He lives in Spring, Texas. 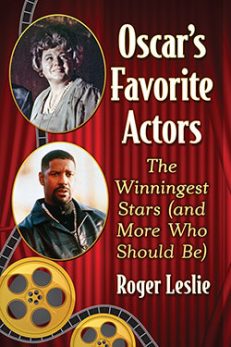