Interviews with His Actors, Editors, Cinematographers and Magicians

With a career spanning almost five decades, Orson Welles became—and in many ways still is—one of entertainment’s biggest names. His temperamental vitality, his humor and his general theatricality contributed volumes to the American stage and movie screen. His concepts of lighting and staging brought a new era to American productions. Welles influenced an entire generation of directors.
These interviews conducted between 2003 and 2005 record the reminiscences of 30 individuals who worked with Orson Welles in a professional capacity. Beginning with 1937 and his work in Mercury Theatre, it follows a selected few of many who were part of Welles’s life up to his sudden death in October 1985. Including actors, editors, cinematographers, camera assistants and magicians, the work presents a rounded view of Welles’s career and, to some extent, his personal life. Each interview is presented in question and answer format with occasional commentary inserted for context or clarification. Projects discussed include Welles’s most notable (Citizen Kane and War of the Worlds) as well as others like Heart of Darkness and The Cradle Will Rock which never quite reached fruition.

Peter Prescott Tonguette is a film critic, essayist and author. His work has appeared in such publications as Cineaste, CinemaEditor, and Senses of Cinema.

“a fascinating oral history…fully half of the 32 interviews collected here are related either to The Magic Show or to The Other Side of the Wind, the most tantalisingly advanced of Welles’ phantom features…illuminating perspectives emerge throughout the book on the paradoxes of Welles.”—Ben Walters, Sight & Sound; “paints an enjoyable, positive picture of a complex, gregarious and energetic figure”—Video Watchdog; “the new generation of Orson Welles scholars is led by Peter Prescott Tonguette. His impressive, indefatigable, and wide-ranging scholarship turns up a wealth of fresh insights and information into Welles’s always-astonishing career. In this captivating book of oral history, Tonguette shows engaging modesty in letting his interviewees take center stage while expertly guiding their recollections into areas of Welles research that most urgently need exploration, including unfinished films and projects, theatrical adventures and misadventures, and the filmmaker’s lifelong avocation as a magician. Orson Welles Remembered is a treasure-house for anyone interested in Welles and a fertile resource for future scholarship on the life and work of this great and multifaceted artist”—Joseph McBride, author of What Ever Happened to Orson Welles?: A Portrait of an Independent Career (2006), Orson Welles (1972/1996) and Orson Welles: Actor and Director (1977); “Peter Prescott Tonguette is the most vigorous and painstaking of the younger Welles scholars, and his Orson Welles Remembered is invaluable for its information, especially about such late, unfinished projects as The Dreamers and The Magic Show”—Jonathan Rosenbaum, author of Discovering Orson Welles; “beautifully walks that line where ‘serious cinema scholarship’ and enjoyable, accessible reading for the interested lay-person and fan can coexist…a terrific job”—Keith Gordon, independent film maker; “Peter Tonguette’s lively gathering of recent interviews with Welles associates will be welcomed by fans and scholars alike. The Editor’s enthusiasm is evident on every page, from his clarifying annotations to his shared reveries. Tonguette elicits fond memories (and some new revelations) from over two dozen figures who worked with Welles in theatre, radio, film, and television; special attention is devoted to the later decades of Welles’ career. Orson Welles Remembered modestly yet rewardingly complements the earlier volumes of interviews with Welles himself by Bogdanovich and Estrin. It thereby manages to fill a gap of which we were not previously aware—a credit to the ingenuity of the project”—Scott Newstok, Department of English, Rhodes College. 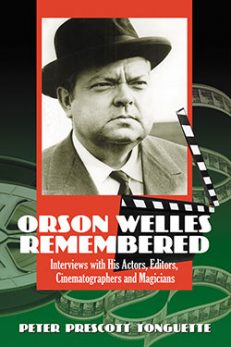