The Creation and First Performances of America’s Premier Concert Stage

Carnegie Hall is recognized worldwide, associated with the heights of artistic achievement and a multitude of famous performers. Yet its beginnings are not so well known. In 1887, a chance encounter on a steamship bound for Europe brought young conductor Walter Damrosch together with millionaire philanthropist Andrew Carnegie and his new wife, Louise. Their subsequent friendship led to the building of this groundbreaking concert space. This book provides the first comprehensive account of the conception and building of Carnegie Hall, which culminated in a five-day opening festival in May 1891, featuring spectacular music, a host of performers and Tchaikovsky as a special guest conductor.

Carol J. Binkowski is a musician, essayist, book reviewer (Library Journal) and nonfiction writer whose work has appeared in the New York Times and the Washington Post among others. She lives in Bloomfield, New Jersey.

Four • Prelude to the Festival 84

Appendix I. Books for Further Study 189 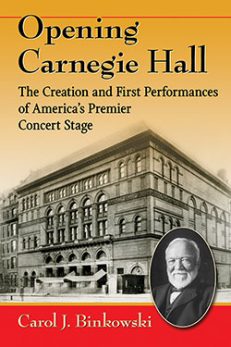