On the Date, Sources and Design of Shakespeare’s The Tempest

This book challenges a longstanding and deeply ingrained belief in Shakespearean studies that The Tempest—long supposed to be Shakespeare’s last play—was not written until 1611. In the course of investigating this proposition, which has not received the critical inquiry it deserves, a number of subsidiary and closely related interpretative puzzles come sharply into focus. These include the play’s sources of New World imagery; its festival symbolism and structure; its relationship to William Strachey’s True Reportory account of the 1609 Bermuda wreck of the Sea Venture (not published until 1625)—and the tangled history of how and why scholars have for so long misunderstood these matters.
Publication of some preliminary elements of the authors’ arguments in leading Shakespearean journals (starting in 2007) ignited a controversy that became part of the critical history. This book presents the case in full for the first time.

Roger A. Stritmatter is an associate professor of humanities at Coppin State University and general editor of Brief Chronicles: An Interdisciplinary Journal of Authorship Studies. He has published on Shakespearean topics in a range of academic journals, including The Shakespeare Yearbook, Review of English Studies, and the Scandinavian Psychoanalytic Review. He lives in Baltimore, Maryland.
Lynne Kositsky is a poet, author, and independent researcher whose honors include the E.J. Pratt Medal and Award for Poetry and the Canadian Jewish Book Award for Youth. Her articles with Roger Stritmatter on the dating and sources of Shakespeare’s The Tempest have appeared in journals such as The Oxfordian and Critical Survey. She lives in Vineland, Ontario.

Part I: A Movable Feast

Part II: What’s Past Is Prologue

Postscript: Something Rich and Strange 199

with Antecedent Passages in Shakespeare 207

B. Plot and Theme Parallels Between Die Schöne Sidea and

for Information with Passages from True Reportory 216

“terrific…well-designed and a pleasure to read”—The Oxfordian: Annual Journal of the Shakespeare Oxford Society. 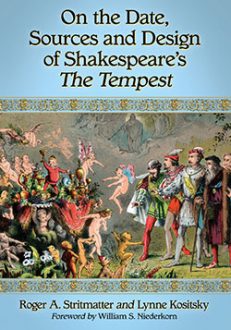 You're viewing: On the Date, Sources and Design of Shakespeare’s The Tempest $29.95
Add to cart