The Life and Films of Hollywood’s “Joy Girl”

The all too brief career of film star Olive Borden (1906–1947) is chronicled in this definitive biography. Apprenticing in short slapstick silent comedies, the vivacious Virginia-born actress rose to stardom after signing with Fox in 1925, enlivening such films as John Ford’s 3 Bad Men (1926). Borden’s career declined after she severed her ties with Fox, and by the early 1930s she was finished in Hollywood. Alcoholism and a devastating series of personal setbacks hastened her death at age forty-one.
Olive Borden’s controversial contract debacle with Fox and her long-term relationship with actor George O’Brien are thoroughly detailed. Personal anecdotes and insights are offered by Ralph Graves, Jr., who befriended Borden in the late 1920s. Dozens of heretofore unattributed screen appearances by the actress are included in the filmography.

Film historian Michelle Vogel lives in Victoria, Australia. Her popular blog can be found at mvozus.wordpress.com.

PART ONE: THE LIFE

San Francisco Examiner Top Ten Title.
“impressively illustrated…most comprehensive…meticulously researched and articulately detailed, Vogel thoroughly investigates the shocking saga behind screenland’s sweetest Cinderella tale with the saddest ending…long-overdue”—DAEIDA Magazine; “a wealth of photos…thorough…a fascinating, heartbreaking story, as well as intelligent and informative. Highly recommended…it has everything…but a fairy tale ending”—Rogue Cinema; “the author has plumbed depths of research that no one else has ever attempted, and I doubt that anyone will ever do better. This one’s a winner. It serves its subject (and the reader) well, expertly excavating an unforgettable true story from the ruins of old Hollywood”—The Silent Movie Blog; “has the most complete filmography of Olive’s and the information about each film makes this book a must-have for any film fan…such a pleasure to read…beautiful told stories…thoroughly detailed”—Examiner.com (San Francisco); “very nice to have a single source for [this] data. By putting the films of Olive Borden in historic context, Michelle Vogel creates a very effective manner of explaining Olive’s place within that world.”—Marilyn Slater, Looking for Mabel. 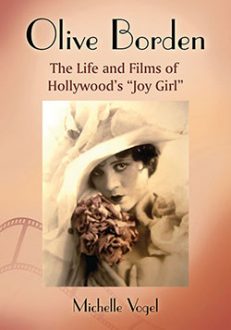