Many of America’s first European settlers felt they were traveling to a sort of promised land, but James Oglethorpe viewed America—specifically, what is today the state of Georgia—as his own personal utopia. Convincing his king to grant him a land parcel, Oglethorpe threw his lot in with 35 poor families and traveled to the New World. There, he became the first administrator of the Georgian colony and founded the town of Savannah.
This work tells the story of James Oglethorpe and of Georgia from its birth as a colony in 1733 to its emergence as a free state 50 years later. Appendices include the roster of initial settlers, the Georgia constitution of 1777 and a detailed timeline.

David Lee Russell is a retired Naval Air Intelligence Officer, and former IT director. He is also the author of three history books on the American Revolution, a book on the history of Eastern Airlines, and two intelligence thriller books. He lives in Canton, Georgia 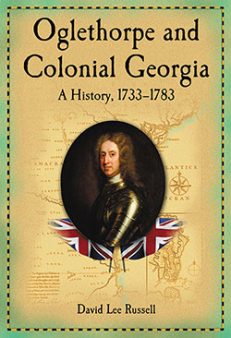 You're viewing: Oglethorpe and Colonial Georgia $29.95
Add to cart