Odilo Globocnik, a collaborator of Adolf Hitler and Heinrich Himmler, was responsible for the deaths of at least 1.5 million people in three Nazi camps in occupied Poland: Treblinka, Sobibor, and Belzec. Along with Rudolf Höss, Globocnik may be named as one of the first industrial-style killers in history. Betraying his homeland by conspiring with Hitler to destroy Austria’s independence, he then launched the Generalplan-Ost, which was to expel over 100 million Slavs into Western Siberia, and played a pivotal role in Aktion Reinhardt, directing the entire program from early 1942 until September 1943, and writing letters to Himmler detailing goods looted from his victims. Globocnik’s Lublin Distrikt gulag was not merely a vehicle for a well-organized pogrom; it also involved creating a highly organized network of ghettos and forced labor camps. By the winter of 1943 nearly all of the Jews of the Lublin Distrikt had been exterminated, leaving only skilled laborers used in Globocnik’s industrial conglomerates. His ethnic cleansing teams, assisted by Ukrainian policing units, also cleared the Polish peasant farmers from the Zamosc Lands.
Very little has been published on Globocnik, most especially the four years he spent in Lublin. This authoritative biography details every aspect of his life from his ancestry to his suicide after being captured. Information has been researched from more than thirty international archives, Globocnik’s SS file, extensive interviews with his lover Irmgard Rickheim and others, a wealth of letters both personal and formal, internal memos and official reports of the SS, diaries, and the reminiscences of survivors. Includes rare photographs, many from the collection of Irmgard Rickheim.

“a remarkable piece of scholarship”—The West Australian Weekend Extra; “Poprzeczny has reminded us of a forgotten monster and done history a service…invaluable book…objective and impeccably researched…both scholarly and compellingly readable”—Quadrant. 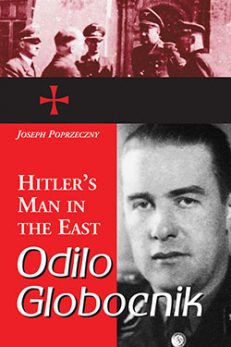 You're viewing: Odilo Globocnik, Hitler’s Man in the East $39.95
Add to cart