How Bodybuilders, Soldiers and a Hairdresser Reinvented Martial Arts for America

Why do so many Americans practice martial arts? How did kung fu get its own movie genre? What makes mixed martial arts so popular? This book answers these questions for the first time with historical research. At the turn of the 20th century, the United States enjoyed a time of prosperity but feared that men were becoming soft. At the same time, the Japanese government sponsored research to develop the best fighting techniques for its new empire. Before World War II, American men boxed and Japanese men practiced judo and karate. Postwar Americans began adopting Chinese, Brazilian, Filipino and other fighting styles, in the process establishing a masculine subculture based on physical and social power. The rise of Asian martial arts in America is a fascinating untold story of modern history, from the origin of karate uniforms to the first martial arts themed birthday party. The cast of characters includes circus strongmen, professional cage fighters, an award winning comic book artist, the inventors of judo, aikido and Cornflakes, and Count Juan Raphael Dante, a Chicago hairdresser and used car salesman with the “Deadliest Hands in the World.” Readers will never look at taekwondo class the same way again.

Review Fix chats with Now with Kung Fu Grip! How Bodybuilders, Soldiers and a Hairdresser Reinvented Martial Arts for America author Jared Miracle, who discusses his inspiration for the book, as well as the long-term effects he’d like the book to have on his readers.

Review Fix: How was this project born?

Jared Miracle: In 2011 I was given the chance to pursue studies with Thomas Green, a folklorist, anthropologist, and renowned martial arts scholar. I was living in Japan at the time, but the opportunity to study with one of your heroes doesn’t come along that often. I uprooted and moved to Texas. I was exploring different avenues for my doctoral project when a series of events—fortunate and otherwise—landed the Robert W. Smith Collection in the campus archives. Smith isn’t as well-known as Bruce Lee, but I would argue that he did at least as much, if not more, to bring East Asian fighting systems to the West. Boxes full of old handwritten correspondence, photographs, film reels, and all manner of other personal effects arrived at the library. On Dr. Green’s recommendation, I was invited to take part in the archival process. When the wind blows, you either bend or break. It was fated to be my doctoral dissertation, which then turned into the book.

Miracle: I was a bit like Charlie in the Wonka factory. At this point I’ve probably read every piece of paper, listened to every audio tape, and spent hours staring down every political cartoon in that collection. From there, the key was to connect the past to the present, so I ended up in the basement of the Library of Congress, digging up old photos and rummaging through videos of veterans describing their time in the Pacific Theater of WWII. There was no small amount of interviewing as I traveled around, visiting with martial arts schools of all kinds. Trying to understand what the martial arts became to Americans led down a lot of unexpected alleyways. I ended up chatting with UFC fighters, karate champions, novelists, and even a comic book artist.

Review Fix: What were your initial goals for the book? Did you succeed?

Miracle: I wanted to kill off some falsehoods and tell as much of the real story as I could within a very short timeline and page restriction. I think the book does that to some extent, but I’m a much better writer now, not so steeped in academic discourse.

Review Fix: Why do martial arts matter in the US?

Miracle: Consider Chinese restaurants. They’re all over the place. Why, of all ethnic cuisines, does seemingly every small town in the country have a Szechuan Garden or House of Chen? There are books (and an excellent film) on that, but no one seemed to have asked, “What’s with all the judo clubs?” Doesn’t it seem strange there it can be hard to find a fencing academy, but there’s a karate or tae kwon do school even in the smallest municipalities?

And the fighting arts hold a peculiar place in American culture. Not a year passes without at least a few action movies featuring high kicking and, these days, not a small amount of jiu-jitsu. There’s a trope that troubled youths should be sent to the neighborhood martial arts academy. Bruce Lee passed away in 1973 and yet there are still books coming out about him. Graphic novels, cartoons, even American music is inundated with references to the combative disciplines. We’re like fish swimming in water.

Review Fix: What do you think is the book’s biggest success?

Miracle: Let me be clear: the book needs to be rewritten. We were on a short deadline and lacked a robust editorial oversight, so I’m still displeased with the end result. That said, I’m pleased to have spread the good name of Robert W. Smith to the extent we did. He should be remembered as a truly formative figure in the history of East-West relations. There were a few images published in the book that had never been released publicly, which is a very positive experience. And, of course, I think everyone should have the chance to encounter Count Dante, the titular hairdresser. What a guy. Making his legend known is a joy.

Review Fix: What did you learn through this book that you didn’t expect to?

Miracle: Whenever you write something as involved as a book, you end up learning about yourself. As Bruce Lee said, “All knowledge ultimately means self-knowledge.” I found out a lot that I didn’t previously understand about how culture influences all aspects of our lives. Setting out on this journey, I had no idea the extent to which a handful of advertising executives in the 1920s shaped my generation’s image of masculinity, for instance. And then there were the intellectual skills, like archiving and curating. Those came along as a matter of course.

Miracle: Let me tell you, William “Bubba” Bush, the professional fighter from Texas who kindly agreed to speak about his life and times, remains one of the most erudite gentlemen I’ve ever known. If anyone has the chance to meet him, it would be wise to listen and learn. What a fount of insight.

Review Fix: How would you like this book to affect people?

Miracle: I hope that anyone who gets through it comes away with a better appreciation for just how important the martial arts are as a piece of our collective cultural legacy. They should be acknowledged on the same scale as the other fine arts, from painting to music to poetry.

Miracle: In its present form, it will provide the most entertainment for graduate students who are interested in the East Asian fighting styles, but have not yet taken a deep dive. Given the chance to rewrite it, the target audience will be young men ages 16-30.

Review Fix: Bottom line, why must someone read it?

Miracle: ‘Must’ is rather strong. If you want to find out the social, political, and accidental factors responsible for your nephew’s karate class, this might be the book for you. If you want to find out about the kung fu hairdresser who owned a used car dealership, marketed his own brand of cigarettes, purchased a Spanish royal title, and may or may not have killed someone with a sword in Chicago in the 60s, then definitely at least pick up that chapter. Count Dante was extraordinary.

Miracle: I’m working on a few different projects. I’m going to be launching a YouTube channel called DeepDive in which we take elements of popular culture and investigate them more than is perhaps reasonable, such as tracing Pokemon back to Tang period China or the convoluted development of protein powder from hazardous industrial waste to costly health product. I also have a young adult novel in the works that involves cage fighting in space. I’m taking on commercial projects these days, like articles and blog posts. Here’s a recent review I did of Carl’s Jr.’s Froot Loops donuts, for instance. Which is to say that if you’re in need of a writer, just shoot me a message! I’m on Twitter @DocKungFu.

Miracle: Just a hearty thanks for chatting with me! It’s been a pleasure. 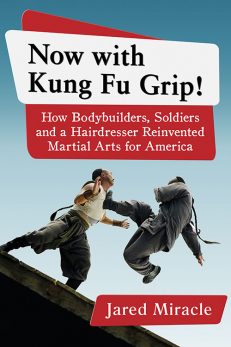