Nixon, Ford and the Abandonment of South Vietnam

South Vietnam fell because of events occurring thousands of miles away from the battlefields—in China, the Soviet Union, Latin America, the Middle East, and Washington’s corridors of power, along protest lines, and around America’s dinner tables. These other wars being fought by American presidents Richard Nixon and Gerald Ford profoundly impacted what happened in Vietnam.
This work examines those other conflicts and the political, social, and economic factors involved with them that distracted and crippled the presidencies of Richard Nixon and Gerald Ford and led to the eventual abandonment of the U.S.-supported South Vietnamese regime. Nixon entered office with the goal of bringing the world together, but saw that goal ruined by the 1973 war in the Middle East, preoccupations with China and the Soviet Union, a weak economy, Watergate, and his disgraceful exit from the White House. Ford’s presidency was tainted almost from the beginning because of the pardon he granted to Nixon, but the American public, tired of war and concerned about the economy, was ready to hear that the war had come to an end. An argument is presented that the war could have been won if the “other wars” had been fought by presidents willing to honor the American commitment to its allies in South Vietnam.

“an excellent account of events in-country from 1973 until the final evacuation…. Recommended. All levels/collections”—Choice; “evenhanded”—Library Journal; “well-written…. Lee and Haynsworth make it abundantly obvious to the reader that President Nixon’s main goal in dealing with the conflict in South Vietnam was to protect himself politically. The authors sum up what happened in Vietnam by giving a clear warning to future Presidents and members of Congress: “The first casualty of war may, indeed, be truth. When politicians fail to lead and act with integrity, serious damage is done to our system”—Parameters. 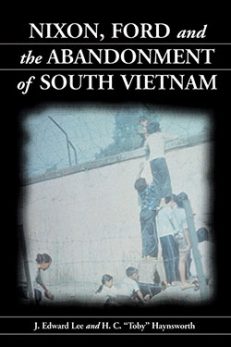 You're viewing: Nixon, Ford and the Abandonment of South Vietnam $29.95
Add to cart