In English and American cultures, detective fiction has a long and illustrious history. Its origins can be traced back to major developments in Anglo-American law, like the concept of circumstantial evidence and the rise of lawyers as heroic figures. Edgar Allen Poe’s writings further fueled this cultural phenomenon, with the use of enigmas and conundrums in his detective stories, as well as the hunt-and-chase action of early police detective novels. Poe was only one staple of the genre, with detective fiction contributing to a thriving literary market that later influenced Arthur Conan Doyle’s work. This text examines the emergence of short detective fiction in the nineteenth century, as well as the appearance of detectives in Victorian novels. It explores how the genre has captivated readers for centuries, with the chapters providing a framework for a more complete understanding of nineteenth-century detective fiction.

LeRoy Lad Panek, professor emeritus of English at McDaniel College (and “One of the most readable, prolific, and perceptive academic scholars of mystery fiction”—Mystery Scene), is the author of a number of books about detective fiction. He lives in Westminster, Maryland. 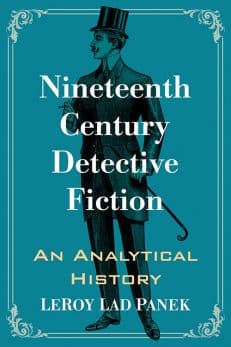