Nihilism in Film and Television

A Critical Overview from Citizen Kane to The Sopranos

This book explores the idea of nihilism, emphasized by German philosopher Friedrich Nietzsche, through its appearance in modern popular culture. The author defines and reflects upon nihilism, then explores its manifestation in films and television shows.
Among the subjects examined are the award-winning television series The Sopranos and the film noir genre that preceded and influenced it. Films probed include Orson Welles’s masterpiece Citizen Kane, the films of Stanley Kubrick, Neil Jordan’s controversial The Crying Game and Richard Linklater’s unconventional Waking Life.
Finally, the author considers nihilism in terms of the decay of traditional values in the genre of westerns, mostly through works of filmmaker John Ford. In the concluding chapter the author broadens the lessons gleaned from these studies, maintaining that the situated and embodied nature of human life must be understood and appreciated before people can overcome the life-negating effects of nihilism.

Kevin L. Stoehr is associate professor of humanities at Boston University and lives in Wells, Massachusetts.

4. The Ambiguity of Horizons: On the Nihilism and Perspectivism of Citizen Kane      67

5. Through the Glass Wall: Welcoming the Stranger inNeil Jordan’s The Crying Game      82

6. When the Legends Die: John Ford and the Fading of Traditions and Heroes      97 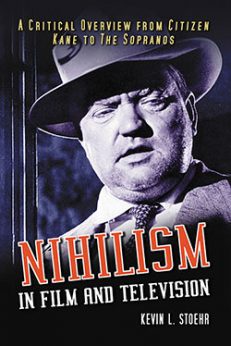 You're viewing: Nihilism in Film and Television $39.95
Add to cart