The New York Yankees are baseball’s most storied team. They first played at Hilltop Park, then moved to the Polo Grounds, then Yankee Stadium, Shea Stadium, back to the renovated Yankee Stadium, and now in the new Yankee Stadium.
They also frequently opened the season in Boston’s historic Fenway Park, fondly remembered Shibe Park in Philadelphia, Griffith Stadium in Washington, and all around the expanded leagues after 1961.
This book details every opening-day celebration and game from 1903 to 2017, while noting how each was affected by war, the economy, political and social protest and population shifts. We see presidents and politicians, entertainers, celebrities, and fans, owners, managers, and most of all, the players.

Lyle Spatz recently stepped down after 25 years as the chairman of SABR’s Baseball Records Committee. He is the recipient of SABR’s Bob Davids and Henry Chadwick, and Seymour Medal awards, and among the books he has written or edited are biographies of Bill Dahlen, Willie Keeler, Dixie Walker and Hugh Casey. 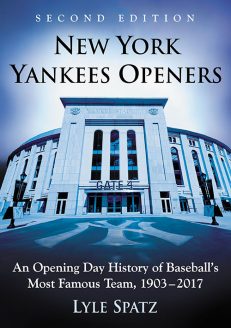