As the Civil War’s toll mounted, an antiquated medical system faced a deluge of sick and wounded soldiers. In response, the United States created a national care system primarily funded and regulated by the federal government. When New Haven, Connecticut, was chosen as the site for a new military hospital, Pliny Adams Jewett, next in line to become chief of surgery at Yale, sacrificed his private practice and eventually his future in New Haven to serve as chief of staff of the new thousand-bed Knight U.S. General Hospital. The “War Governor,” William Buckingham, personally financed hospital construction while supporting needy soldiers and their families. He appointed state agents to scour battlefields and hospitals to ensure his state’s soldiers got the best care while encouraging their transfer to the hospital in New Haven. This history of the hospital’s construction and operation during the war discusses the state of medicine at the time as well as the administrative side of providing care to sick and wounded soldiers.

Ira Spar, M.D., is president of the Hartford Medical Society, a board member of the Society of Civil War Surgeons, a fellow of the American Academy of Orthopedic Surgeons. He served as a U.S. Army battalion surgeon in the Vietnam War and lives in Farmington, Connecticut. 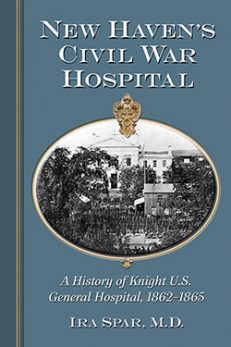