This work takes an in-depth look at the world of comic books through the eyes of a Native American reader and offers frank commentary on the medium’s cultural representation of the Native American people. It addresses a range of portrayals, from the bloodthirsty barbarians and noble savages of dime novels, to formulaic secondary characters and sidekicks, and, occasionally, protagonists sans paternal white hero, examining how and why Native Americans have been consistently marginalized and misrepresented in comics. Chapters cover early representations of Native Americans in popular culture and newspaper comic strips, the Fenimore Cooper legacy, the “white” Indian, the shaman, revisionist portrayals, and Native American comics from small publishers, among other topics.

Michael A. Sheyahshe is a member of the Caddo Nation of Oklahoma. He has written for Illusions, Trauma Magazine, Native Peoples, and Games for Windows: The Official Magazine and is a Trustee of the Caddo Nation’s Heritage Museum. He lives in Albuquerque, New Mexico.

Appendix B. Literature Review and Resources      199

“important…recommended”—Choice; “a groundbreaking work…should be celebrated as an introduction to this much-neglected area of study”—World Literature Today; “in-depth…Sheyahshe delivers a much-needed analysis and overview”—Nuvo Newsweekly. 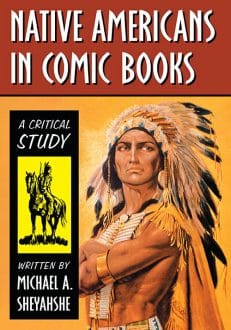 You're viewing: Native Americans in Comic Books $29.95
Add to cart