Her Life, Death and Legend

Naomi “Omie” Wise was drowned by her lover in the waters of North Carolina’s Deep River in 1807, and her murder has been remembered in ballad and story for well over two centuries. Mistakes, romanticization and misremembering have been injected into Naomi’s biography over time, blurring the line between reality and fiction. The authors of this book, whose family has lived in the Deep River area since the 18th century, are descendants of many of the people who knew Naomi Wise or were involved in her murder investigation.

This is the story of a young woman betrayed and how her death gave way to the folk traditions by which she is remembered today. The book sheds light on the plight of impoverished women in early America and details the fascinating inner workings of the Piedmont North Carolina Quaker community that cared for Naomi in her final years and kept her memory alive.

Hal E. Pugh is a historian and potter living in northern Randolph County, North Carolina. A graduate of Appalachian State University with a degree in anthropology, his research on Quaker history and ceramics has been published in The Southern Friend the journal of the North Carolina Friends Historical Society and Ceramics in America.

Historian and potter Eleanor Minnock-Pugh is a graduate of Appalachian State University with a degree in education. Her research on Quaker history and ceramics has been published in Ceramics in America. She lives in northern Randolph County, North Carolina. 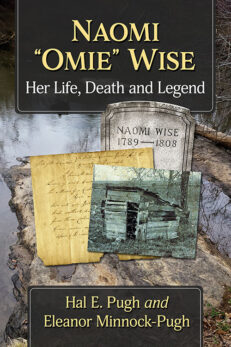