“My Will Is Absolute Law”

When the South fired the first shot of the Civil War in April 1861, hundreds of volunteers flocked to answer President Lincoln’s call to arms, anxious to defend their country and uphold the sanctity of the Union. Among these first volunteers was Robert H. Milroy. Determined to obtain a military education and denied his wish to attend West Point, Milroy had at last secured a position to attend Captain Partridge’s Military Academy at Norwich University in Vermont. After graduating, however, he was thwarted time and again in his desire for a military career, quickly discovering that military appointments tended to favor West Point graduates. A fervent abolitionist and dedicated patriot, Milroy craved military action and viewed the Civil War as his long-awaited opportunity to achieve the glorious reputation he so ardently desired.
Compiled from primary sources such as Milroy’s correspondence and the letters of those who knew him, this biography details the life and times of General Robert H. Milroy. Although perhaps not one of the major players on the stage of Civil War drama, Milroy was one of the staunchest defenders not only of the Union but of the Emancipation Proclamation as well. Focusing primarily on Milroy’s Civil War career, this work serves to provide information about lesser known operations in western Virginia during 1861 and 1862 as well as illustrate the bonds that formed between commanders and their men. It also provides a case study of how an abolitionist general enforced his will in various regions throughout the Confederacy. Appendices contain a portion of Milroy’s unfinished autobiography and a list of troops commanded by Milroy in combat.

Jonathan A. Noyalas is a history professor at Lord Fairfax Community College in Middletown, Virginia and is director of the College’s Center for Civil War History and Institute of Culture and History. He is the author of Plagued by War: Winchester, Virginia, During the Civil War (Gauley, 2003) and lives in Martinsburg, West Virginia. 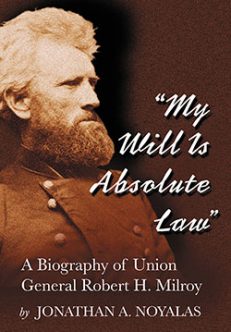