The Public and Private Lives of Billie Burke

Broadway actress Billie Burke was one of the most sought after young stage beauties of her time, stealing the hearts of Enrico Caruso, Mark Twain, and, most importantly, famed Broadway producer Florenz Ziegfeld, who became her husband. Following Ziegfeld’s death, the threats of financial ruin and encroaching age forced Burke to recreate herself as a Hollywood character actress.
This biography benefits from the cooperation of the daughter and grandchildren of Burke and Ziegfeld, as well as from anecdotes provided by actors who performed with Burke on the stage and screen. In addition to studying the character and significance of Burke’s greatest screen role as Glinda the Good Witch of the North, this richly illustrated book also provides a complete history of Burke’s stage, screen, and radio work.

Biographer Grant Hayter-Menzies lives in British Columbia. His works include biographies of Charlotte Greenwood, Princess Der Ling, Sarah Pike Conger, Pauline Benton, and Lillian Carter, along with the life of a dog, military mascot Rags of the First Division in World War I. 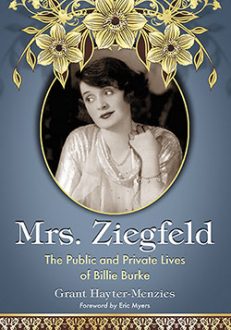