Morality and the Law in British Detective and Spy Fiction, 1880–1920

Who decides what is right or wrong, ethical or immoral, just or unjust? In the world of crime and spy fiction between 1880 and 1920, the boundaries of the law were blurred and justice called into question humanity’s moral code. As fictional detectives mutated into spies near the turn of the century, the waning influence of morality on decision-making signaled a shift in behavior from idealistic principles towards a pragmatic outlook taken in the national interest.
Taking a fresh approach to Sir Arthur Conan Doyle’s popular protagonist, Sherlock Holmes, this book examines how Holmes and his rival maverick literary detectives and spies manipulated the law to deliver a fairer form of justice than that ordained by parliament. Multidisciplinary, this work views detective fiction through the lenses of law, moral philosophy, and history, and incorporates issues of gender, equality, and race. By studying popular publications of the time, it provides a glimpse into public attitudes towards crime and morality and how those shifting opinions helped reconstruct the hero in a new image.

Kate Morrison is an avid researcher and historical sleuth, with extensive experience in education, her main research interests lie in Victorian and Edwardian crime fiction. She lives in Glasgow, Scotland. 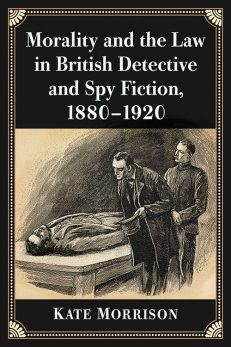