Before unmanned combat drones, there was the Grumman OV-1C Mohawk, a twin-engine turboprop fixed-wing reconnaissance aircraft loaded with state-of-the-art target detection systems. Crewed by a pilot and observer, it flew at treetop level by day, taking panoramic photographs. By night it scanned the landscape from 800 feet with side-looking airborne radar (SLAR) and infrared. This lively, detailed memoir recounts the author’s 1968–1969 tour with the 1st Cavalry Division in Vietnam, serving as a technical observer (T.O.) aboard an unarmed Mohawk, searching for elusive enemy forces near the DMZ and along the Laotian and Cambodian borders, dodging mountains in the dark and avoiding anti-aircraft fire.

Russell Pettis served as a corporate fleet manager for a Fortune 500 company and wrote a monthly automotive information bulletin, covering driving techniques, new automotive technology and other safe driving guidelines. Currently he serves as the C.F.O. of Pettis Education, an educational consulting company. He lives near Annapolis, Maryland.

“Anyone who served on operations in Vietnam is going to feel right at home with Pettis’ experiences as a member of the 1st Calvary Division… I immensely enjoyed reading Russell Pettis’ account of his exciting missions, along with his descriptions of day-to-day grunt life in Vietnam. I highly recommend Mohawk Recon.”—VVA Veteran 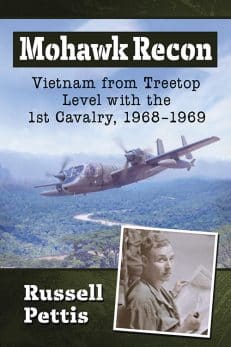