The United States federal government is the oldest in existence and stands as the chief democratic model in the world. However, the exact workings of the various levels of the United States government are a mystery to many. Because the basis for each level’s operations is the charter that formed it, this volume uses model charters to provide a straightforward explanation of why American governments work. Each chapter covers a different level of government (city, county, regional, state, and federal) and begins with information regarding that government’s history, future, types and organization. Model charters, provided at the end of each chapter, describe the laws that form the basis of government. The charters are assembled from nationally recognized planning agencies and associations advocating good governmental practices. A glossary of commonly used terms is also provided as well as a national resource directory, which highlights major sources for further research on the topics covered in the chapters.

Roger L. Kemp, Ph.D., ICMA-CM, has been a city manager on both the East and West coasts for more than 25 years. He is presently Distinguished Adjunct Professor of Public Administration at Golden Gate University and a Fellow of The Academy of Political Science. 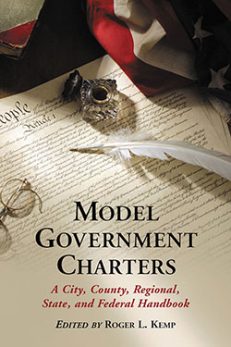