Michael Jack Schmidt, in the minds of many the greatest third baseman of all time, was a Philadelphia institution. From 1973 to 1989 he led the Phillies to five National League championship series and two World Series. Twelve times an All-Star, Schmidt was perhaps baseball’s premier power hitter during the 1970s and 1980s. His 548 home runs are seventh best all-time. In the field he was just as exceptional, winning ten Gold Gloves, more than any other third baseman besides Brooks Robinson. A three-time N.L. Most Valuable Player (1980, 1981 and 1986), Schmidt was elected to the Baseball Hall of Fame in 1995, his first year of eligibility. This book is the first serious account of Schmidt’s celebrated career with the Philadelphia Phillies. Concentrating on contemporary newspaper accounts, periodicals, baseball histories and biographies by Schmidt’s teammates, this long-overdue work is the full story of one of the game’s greatest sluggers, and one of its true heroes and role models.

William C. Kashatus is a professional historian at the Chester County Historical Society in West Chester, Pennsylvania. He is also a lecturer at the University of Pennsylvania. A regular contributor to the Philadelphia Daily News, he is also the author of Diamonds in the Coalfields (2002), Connie Mack’s ’29 Triumph (1999) and One-Armed Wonder (1995). 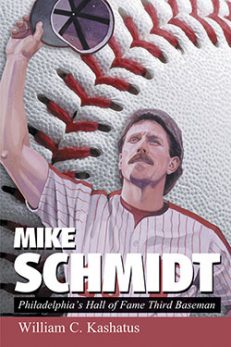