Middle Georgia and the Approach of Modernity

By eve of the 20th century, Middle Georgia was a rural region transitioning from the aftermath of the Reconstruction Era into the modern age. This collection of new essays describes the lives of the common people of the day. A grisly mass murder underscored issues of race, class and poverty. African Americans struggled for self-betterment against the rise of Jim Crow. Women striving to overcome gender barriers found a hero in a pioneering Georgian female pilot. The government worked to protect communities from the influenza pandemic of 1918. Fighting boll weevils and declining cotton prices, farmers diversified crops and developed of a national pimento pepper industry.

Fred R. van Hartesveldt taught history for forty years, mostly at Fort Valley State University, before retiring in 2014. During his career he published six books and more than a dozen scholarly articles. He lives in Fort Valley, Georgia. 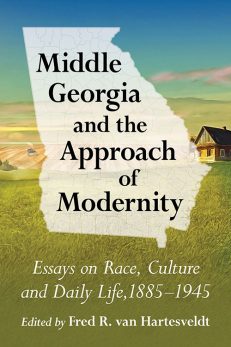 You're viewing: Middle Georgia and the Approach of Modernity $55.00
Add to cart