Mexico, NAFTA and the Hardships of Progress

Since the 16th century, Mexico has in many ways been held captive by outsiders. In the modern era, outsiders have most often made their impact through control of the Mexican economy and helping to establish a ruling elite while millions of ordinary citizens face abject poverty. With the advent of the North American Free Trade Agreement (NAFTA), Mexico’s leadership predicted a new wave of economic progress in the country. However, a devaluation of the peso showed that the Mexican economy was as problematical as before. This work first examines the sociopolitical history of the country, and how the events of the past continue to influence the government’s policies. Mexico’s post–NAFTA future is then explored, with particular emphasis placed on how economic policy could evolve in a period of free trade. A 2013 postscript concludes the work.

II: Reconquest and Proletarianization of the Land      200

11 Domestic Reorganization and the Emergent Zone of Influence      222

“a very useful discussion and history of capital and labor relations in the two countries”—Choice. 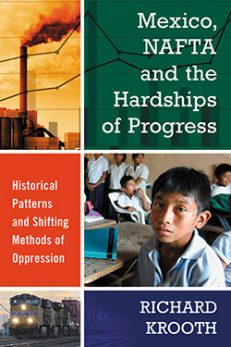 You're viewing: Mexico, NAFTA and the Hardships of Progress $29.95
Add to cart