Mexican Social Movements and the Transition to Democracy

Between 1995 and 1996 in Tepoztlán, Morelos, a movement was made against the construction of a large tourist development project. The case gained international attention as community members rejected their elected officials, designed their own local government and eventually won bitter victory against both the state and the internationally financed corporation developing a golf course and country club.
This work focuses on how, in a time of generalized political change in Mexico, activists blended local, national and transnational courses of identity and social change to produce political practices that allowed them to win redress of their grievances, to alter local social relations and to contribute to changes within the national political system.
Here, the anti-golf movement is chronicled. Important symbolic and organizational networks within Tepoztlán that took part in the conflict are explored. The role of global influences on the community’s everyday life is examined, as well as the ways in which the movement contributed to the evolution of a more democratic culture. Parallels in the more recent movement in Atenco against the construction of Mexico City’s new international airport are analyzed.

John Stolle-McAllister worked in Morelos as a coordinator and liaison between social organizations and Augsburg College’s Center for Global Education. He is an associate professor of Spanish and Cultural Studies at the University of Maryland. Recently, he was a visiting researcher at the Universidad de Otavalo and the Universidad Andina Simón Bolivar in Ecuador.

3. Embodying the Global in the Local: Environmentalism and Human Rights      129

4. Toward a Democratic Political Culture: Public Spheres and Activist Networks      163

Appendix: Social Movements and the Construction of Contingent Hybridities      237 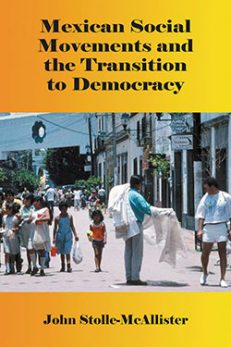 You're viewing: Mexican Social Movements and the Transition to Democracy $39.95
Add to cart