American actress Mercedes McCambridge is an Academy Award-winning star of radio, television, film, and the stage, active in all four entertainment mediums between 1936 and 1991. Publicly, she was active in politics, a lecturer at several colleges, and an important activist in the fight against alcoholism; privately, she suffered from divorces, miscarriages, suicide attempts, the death of her only child, and a hard-won battle with her own alcoholism. From roles on such radio shows as Lights Out! at 19 to her starring role in Neil Simon’s play Lost in Yonkers at 75, this biography both reveals her personal life and career and gives insight into an important period of show business history.
Part I is a full biography from McCambridge’s birth in Illinois in 1916 to her 1998 appearance at the Academy Awards. Part II gives McCambridge’s radio, television, film, and theatre performances, each entry listing the name of the show, name of the character, dates, other performers, directors, and an indication of which were sustained short- or long-running roles and which single performances on a radio or television series. Research is drawn from books, periodicals, and personal interviews with McCambridge’s peers.

Ron Lackmann, a retired teacher, has contributed numerous articles to such publications as Screen Greats and Afternoon TV. He lives in Stone Ridge, New York.

PART I: HER LIFE AND TIMES 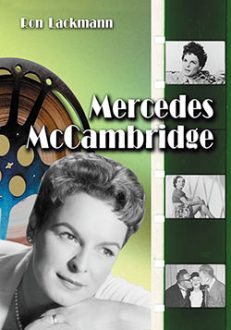