Abandoned on the streets of Philadelphia at age four, Matthew Saad Muhammad (1954–2014) survived orphanages, street gangs and prison to become one of the most exciting prizefighters of boxing’s last Golden Age of the late 1970s and early 1980s. Time and again he battled back from the brink of defeat to win against the best fighters of the era. His victory over Marvin Johnson for the WBC Light Heavyweight Championship was described by one veteran boxing writer as the only fight he covered where it seemed both fighters might die.
He fought not just for wealth and fame but to discover his identity—he had no idea who he was, where came from or what happened to his parents. This book reveals the full story of “Miracle Matthew” and how he became one of Philadelphia’s great ring legends.

William Dettloff was senior writer at The Ring magazine for 15 years and has been the editor-in-chief at Ringside Seat magazine since 2017. He has written extensively for HBO, ESPN and other outlets. He lives in the Lehigh Valley in Pennsylvania. 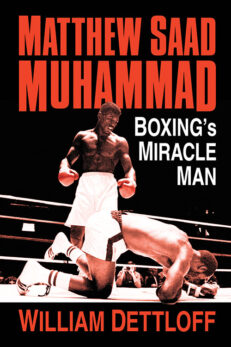