On May 8, 1861, Matt Ransom resigned from the North Carolina House of Commons and accepted a commission as a Confederate officer. Like many North Carolinians, Ransom had been reluctant to see his state leave the Union; though he owned slaves at the onset of the war, he strongly believed that slavery was a doomed institution. However, the action at Fort Sumter, South Carolina, had made his course of action all but inevitable. Despite the fact he was without military experience or training, Ransom saw it as his duty to join the Confederate forces. He left behind a young family and courageously fought Union forces until the end of the war; his brigade was present at Appomattox for Robert E. Lee’s surrender. He was twice wounded in battle and was widely recognized as an effective and highly competent leader by enlisted men and officers alike. After the war, he returned to his beloved North Carolina, and following considerable hardship, rebuilt his plantation. 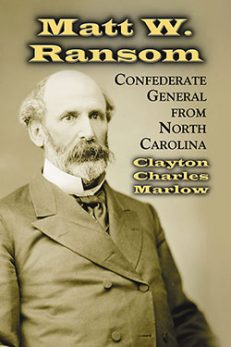