Masters of the “Humdrum” Mystery

In 1972, in an attempt to elevate the stature of the “crime novel,” influential crime writer and critic Julian Symons cast numerous Golden Age detective fiction writers into literary perdition as “Humdrums,” condemning their focus on puzzle plots over stylish writing and explorations of character, setting and theme. This volume explores the works of three prominent British “Humdrums”—Cecil John Charles Street, Freeman Wills Crofts, and Alfred Walter Stewart—revealing their work to be more complex, as puzzles and as social documents, than Symons allowed. By championing the intrinsic merit of these mystery writers, the study demonstrates that reintegrating the “Humdrums” into mystery genre studies provides a fuller understanding of the Golden Age of detective fiction and its aftermath.

Curtis Evans, an independent scholar and book dealer, has published numerous articles and essays on detective fiction as well as an award-winning book on industry and labor in the American South. He lives in Germantown, Tennessee. 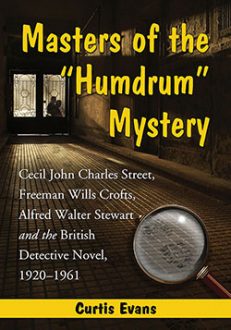 You're viewing: Masters of the “Humdrum” Mystery $39.95
Add to cart