Masculinity in the Interracial Buddy Film

Feature films function as a keeper of America’s collective conscience—a repository of fears, guilt, and hopes. “Buddy films” about men of different races depict a world where a peaceful balance is possible and conflicts can be resolved. Since the 1930s these films have presented various forms of masculinity, reflecting dominant mainstream social traditions, images of men and manhood within the culture.
Interracial buddy films include such examples as the Silver Streak, 48 Hrs, Beverly Hills Cop, Lethal Weapon and The Shawshank Redemption. Many of these films have been made into franchises, furthering their cultural importance as filmic versions of interracial equality.
This critical study analyzes the idealized interracial relationships, the heterosexual masculine roles within the films and the appearances of this kind of film in various genres. The book is arranged in six major chapters, each focusing upon a particular era in the development of the interracial buddy film. The book also examines the film sequel as a validation of the enduring significance of interracial interaction. The scope of the work is not limited to Caucasian/African-American pairings. Films with a myriad of racial and ethnic combinations are also analyzed, such as Tin Cup, Rush Hour, Shanghai Noon and Ocean’s Eleven.

Melvin Donalson is an associate professor of English at California State University, Los Angeles, and a screenwriter and filmmaker. He lives in Pasadena, California.

Introduction: The Intersection of Gender, Race, and Cinematic Genres      3

“Because we are headed for an increasingly diverse, social horizon, Mel Donalson does important ‘future forward’ work with his exploration of the deep linkages between interraciality and masculinity in the great American ‘buddy’ movie. Ranging from such famous buddy hook-ups as Tonto and the Lone Ranger, to Sidney Poitier and Tony Curtis, to Eddie Murphy and Nick Nolte, and well beyond, Masculinity in the Interracial Buddy Film’s sophisticated discussion of the issues is clear, comprehensive and a pleasure to read. Donalson’s book makes a fresh and solid contribution to the growing discourse of black cinema studies.”—Ed Guerrero, Cinema Studies, Africana Studies, New York University. “Must-reading for anyone seeking to understand the crucial intersection of politics, media and race. More than a book that charts the evolution of Black–white male camaraderie in American film, Mel Donalson has written a compelling examination of the interracial buddy film, which reveals the important link between cinema and race relations in America.—Bakari Kitwana, author of Why White Kids Love Hip-Hop: Wankstas, Wiggers, Wannabes and the New Reality of Race in America. 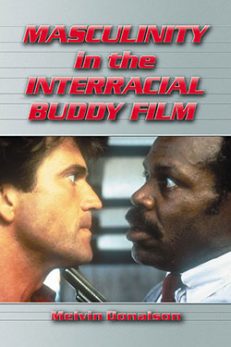 You're viewing: Masculinity in the Interracial Buddy Film $35.00
Add to cart