A Biography; With a Listing of Major Stage Performances, a Filmography and a Discography

Early in the century, Marie Dressler was hailed as one of America’s finest comics, with a 20-year string of Broadway and vaudeville successes including The Lady Slavey, Miss Prinnt, Higgledy Piggledy, The Man in the Moon, and Tillie’s Nightmare. She starred with Charlie Chaplin in the first ever feature-length comedy Tillie’s Punctured Romance and later in Min and Bill for which she won an Academy Award. A brilliant comedienne in body, timing, inflection and reactions, her talents far exceeded the expectations of slapstick, and her movies earned sums far greater than those of Garbo, or Harlow, or even Gable.
This work examines Dressler’s life from vaudeville to talkies. Based on extensive research and interviews with Dressler’s surviving friends, co-stars and colleagues, including Maureen O’Sullivan, Jackie Cooper and Anita Page, it details her public and personal successes and failures. A listing of her stage appearances, vocal recordings and films is included.

Matthew Kennedy is a film critic for Bright Lights Film Journal. Visit his website at www.matthewkennedybooks.com. 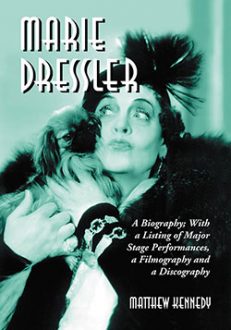