Critical Essays on the Series and Its Characters

One of the first full-length academic projects on the television series Smallville, this collection of new essays explains why the WB/CW series is important to understanding contemporary popular culture. The essays are presented in four sections covering broad categories: Clark Kent’s metamorphosis to Superman and the influence of his parents and the home; the role of the series’ noteworthy female characters; the series’ representations of the Other, explorations of identity, and the ways in which characters speak to Clark’s own struggles; and audience reception of the series and its position within the Superman narrative universe.

Cory Barker is a Ph.D. candidate in the Department of Communication & Culture at Indiana University. His writing has appeared in Vox, Complex, The A.V. Club, and other publications. He lives in Bloomington, Indiana.
Chris Ryan is an editor and social media researcher in Vancouver, British Columbia.
Myc Wiatrowski is an analyst of business and culture and associate instructor in the Department of Folklore and Ethnomusicology at Indiana University in Bloomington.

The Smallville Destiny: The Superhero’s Shaping by His Archetypal Fathers—James F. Iaccino 25

“Always hold on to Smallville”: Domesticity and the Male Hero—Bridget Kies 45

Rummaging Through the Closet: (Un)Masking the Signified Other in Smallville’s First Four Seasons—Jonathan A. Austad 115

“An engaging collection of essays…deserves a place on the shelf of Superman fans, superhero scholars, and Smallville fans alike”— Journal of the Fantastic in the Arts 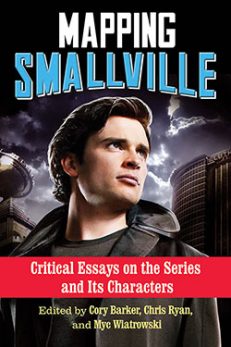