Since 1876, approximately 16,000 young men have enjoyed at least a taste of glory by appearing in big league games, many of them only a few times. By the end of the 2009 season, out of the millions who have aspired, fewer than three thousand individuals had had the good fortune to be a major league regular for five or more seasons. The median age at which they hung up their spikes was 35. However, 197 men played in their last big league contest at the age of 30 or younger.
With a focus on the stories of 15 greats and near-greats, this book provides information on these 197 men. Why did their careers end so soon? The reasons are varied and include drug and alcohol abuse, suicide, illness, injury, banishment, and declining ability among others.

The late Charles F. Faber wrote numerous books on educational administration, school law, baseball and other topics. He was a retired university professor and lived in Lexington, Kentucky. 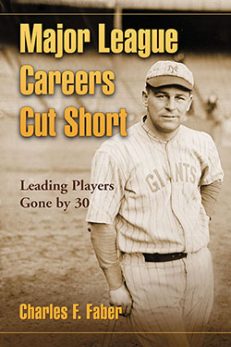