Biography of a Baltimore Confederate

Major General Isaac Ridgeway Trimble, one of the oldest and more eccentric officers involved in the Civil War, made himself a favorite of Stonewall Jackson through his courage and stubborn energy. Born to a Quaker family, Trimble spent his childhood on the American frontier. After graduating from West Point, he served in the Old Army and then involved himself with the growing railroad industry of the 1830s, living at the forefront of American modernization. As the war began, he sided with the South, burning railroad bridges north of Baltimore to deny Washington the support of Union troops, and then moving to Virginia. He enlisted in the Engineers and constructed battery emplacements. Commissioned brigadier general in late 1861, Trimble distinguished himself at Cross Keys, Gaines’s Mill, Manassas, and Gettysburg; was involved in the Baltimore riots; and spent time as a prisoner on Johnson’s Island.
This biography covers Trimble’s personal life and career with both the railroad and the military. Simultaneously, it serves as a case study of an American who chose to side with the South. Before the war, Trimble traveled freely between states and showed no early indication of a regional attachment. The work uses Abraham Maslow’s motivation model, the hierarchy of needs, to reconcile Trimble’s self-interest with his need to belong to a community. It also raises various questions related to Southern history, including community identity, modernization, and the concept of the “New South.” 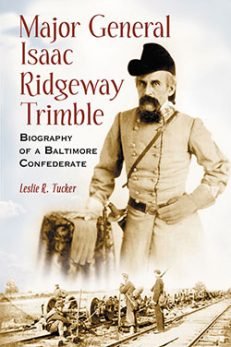