Mack, McGraw and the 1913 Baseball Season

Few franchises in the deadball era won as consistently or as often as the New York Giants and Philadelphia Athletics. Between them, the teams claimed 12 pennants and finished second or higher 22 times. The steady success also earned managers John McGraw and Connie Mack their reputations.
It was history in the making, then, when the two Hall of Famers led their clubs into the 1913 World Series, the third and final time they went head to head for the world championship. The author provides a carefully researched account of the season-long dominance of the Giants and A’s, the narrative building toward a dramatic collision in the Fall Classic.

“fascinating…readers…will be rewarded with a revealing look at both some of the game’s greatest players and one of the most memorable World Series of all time”—Booklist; “well-researched, highly readable work”—Sports Collectors Digest; “excellently researched…highly recommend[ed]”—SABR Deadball Committee Newsletter; “recommend…wonderful…a real page turner…the baseball excitement contained herein is the equal of a present-day Mets-Phillies game”—National Board of Review; “Richard Adler has captured the flavor and drama of the final World Series clash between the Deadball Era’s two most successful managers, sons of Erin who couldn’t have been more unalike.”—Norman Macht, author of Connie Mack and the Early Years of Baseball; “The 1913 season marked the end of an era, with legendary managers John McGraw and Connie Mack facing each other in the World Series for the third and final time. Rich Adler has done a fine job of recapturing the drama of the campaign and the nuances of the unforgettable personalities involved. A must-read for anyone who loves this fascinating bygone era.”—Peter Morris, author of Baseball Fever, A Game of Inches, and Level Playing Fields; “This well-researched, highly readable work brings an oft-ignored slice of baseball history—the 1913 season—to life. Rich Adler is to be commended for his skill in capturing the personalities of John McGraw, Connie Mack, and many other players and managers both famous and obscure.”—David Fleitz, author of Shoeless: The Life and Times of Joe Jackson. 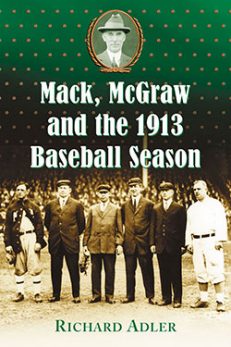