The Art and Practice of Virtual Filmmaking

Unlike traditional animation techniques that use specialized 3D animation software, machinima—a term derived from the words “machine” and “cinema”—records the action in real-time interactive 3D environments, such as those found in video games, to create a cinematic production. No longer solely the province of hard-core gamers, machinima has become central to the convergence between animation, television, and film, but retains its own identity as a unique media format. It has evolved quickly within massive multi-player gaming and virtual platforms such as Second Life, The Sims, World of Warcraft, and virtual worlds under development. These interviews, essays, and discussions with leading machinima producers, reviewers, performers, and advocates discuss scripting basics, character development, and set design, as well as tips on crafting machinima through creative use of sound, lighting, and post-production.

Phylis Johnson is a professor and former chairperson of the Radio-Television Department at Southern Illinois University, Carbondale.
Donald Pettit is a freelance photographer and videographer, and the CEO of Lowe Runo Productions, a media company that features machinima and video production.

With comments by Phylis Johnson: The Soundscape of the American Western      65

With comments by Larkworthy Antfarm: The Fine Art of Machinima      91

With comments by 1angelcares Writer: The Voices of Machinima      116

With comments by Toxic Menges: It’s All About Pre-Production      137

With comments by Jonathan Pluskota: Aesthetics for Sound Design      159

With comments by Jay Jay Jegathesan: Partnerships and Collaboration      170

11. Expression Through Machinima: The Virtual Classroom (by Bryan Carter)      197

Roundtable One: Terminology, Technology and Practice      266

“in-depth look at many aspects of the world of machinima. Recommended”—Choice; “one of the best and most interesting books on machinima currently available”—Renderosity; “gathers essays and interviews highlighting technical aspects of machinima”—Reference & Research Book News. 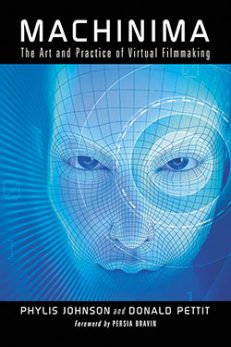