The Life and Career of Hollywood’s “Mexican Spitfire”

Here is the first extensive, full-length biography and career record on the life and work of Mexican whirlwind Lupe Vélez (1908–1944). Over the years many crude myths have surfaced about Vélez, the most notorious that she “died with her head in the toilet.” This biography not only studies Lupe’s personal life and career—including her tempestuous marriage to Johnny Weissmuller—but also examines her death in detail. It has been almost seven decades since her untimely end; at long last, the ugly rumors and myths are debunked—for good.
Included are never-before-told family stories and photographs from Lupe’s second cousin, and an analysis of the actress’s lasting influence on popular culture. The foreword by Oscar-winning film historian Kevin Brownlow focuses on the fact and fancy behind Lupe Vélez’s colorful public image.

Film historian Michelle Vogel lives in Victoria, Australia. Her popular blog can be found at mvozus.wordpress.com.

“a must for anyone curious in the stories of early Hollywood”—Midwest Book Review; “one of the best film books of 2012”—Thomas Gladysz, Huffington Post; “with her usual expertise at painstaking detail, Vogel’s heavy research reveals the troubled, vulnerable woman beneath the persona…this is a book which has everything…filled with rare photographs. Michelle Vogel has carved a firm and lofty niche among Hollywood biographers, noted for her thoroughness, accuracy, attention to detail, and readability. Lupe Velez may be her best work so far”—Rogue Cinema; “extensive”—Turner Classic Movies. 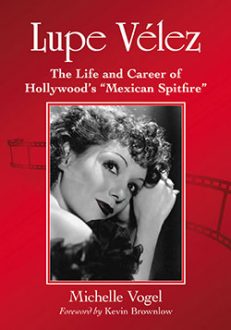